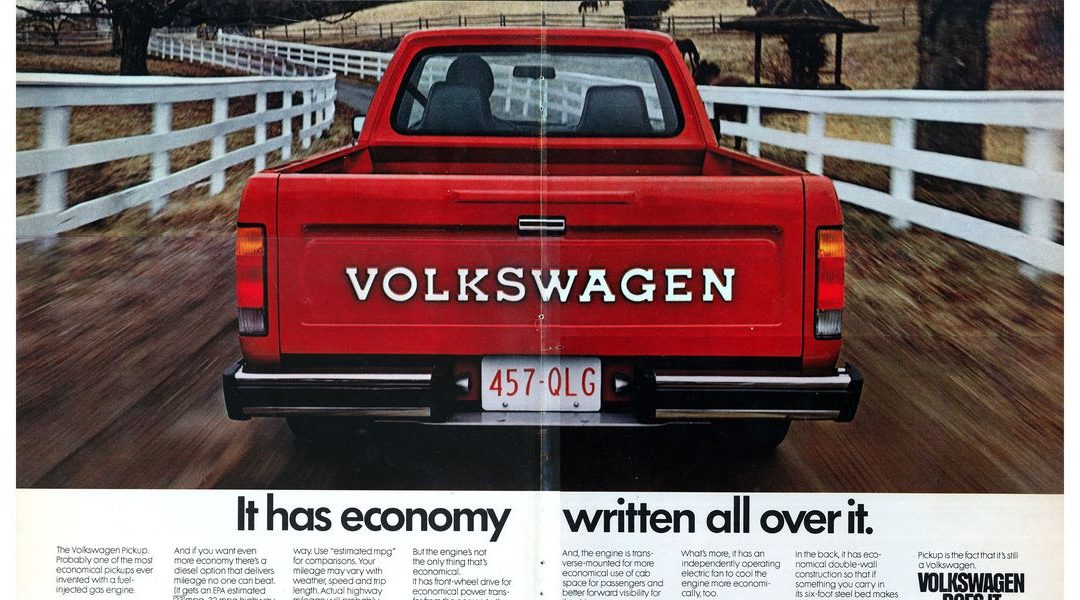 When we say Volkswagen, the obviously first things that may come to mind is the beetle or – of course – The Rusty Rabbit.

However, we don’t usually relate pickup trucks with the Volkswagen brand. Nevertheless, did you know that Volkswagen had pickups even in the 1980s?

It was in 1979 when Volkswagen turned their Rabbit into a pickup. This version was produced to compete with the other compact pickups that existed at that time. It may look small and compact but it had a spacious six-foot bed at the back. This can carry up to 1,100 lbs.

One of the features that make this vehicle attractive to consumers is its high mileage. Saving up on fuel expenses plus having a vehicle to help you on hauling loads is a win-win for many car enthusiasts and car owners at that time.

What’s great about the Rabbit Pickup was the availability of multiple options. They can choose between either a 1.6 l gas engine or a diesel engine. The gas engine boasts 78 hp with a torque of 84 lb-ft. On the other hand, the diesel engine has 48 hp and torque of  56.5 lb-ft.

Lastly, they were also available in different packages. Among the most popular packages are the sport package and the western package. The sport package has a center console, sport steering wheel, side stripes at the body, and bucket seats. The western package on the other hand had a skid plate, cargo bed tie-down rails, and some western-style mirrors.

It may seem that the Volkswagen Rabbit Pickup would be a hit because of its features and options available. However, there aren’t plenty of them today because they only sold about 75,000 units before the production was stopped way back in 1983.

Why Was Production Stopped?

The reasons for this are due to more affordable gas prices as well as the lure of full-sized pickup trucks. Back in the early ’80s and during the first production of the Rabbit Pickup, they had lots of buyers because people were more practical due to higher gas prices. Since the gas prices dropped, consumers were more attracted to full-sized trucks rather than the compact Rabbit Pickup.

Where To Buy One Today?

Even if there are only a few that they sold back in the 1980’s it is still not impossible to find a Rabbit Pickup nowadays if you really want one. Depending on the condition of the vehicle, you can get them for as low as $1000 at eBay. Some of their parts can be replaced with other Rabbit series cars and you can also change the engine for a more modern one.